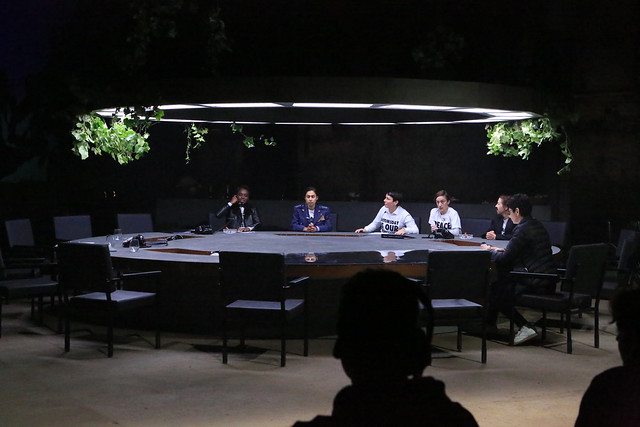 I’m allowing a few months of being immersed in The Manchester International Festival (MIF) to sink in. Along with five other creatives, I was awarded a Jerwood fellowship to observe the production of a large scale work from initial concept to world premiere, learn from the MIF team and to connect what we experienced, both to our own practices, and back to Manchester’s Creative community. We were supported by the MIF Creative Learning team and PANDA through the fellowship and supported one another as a group. 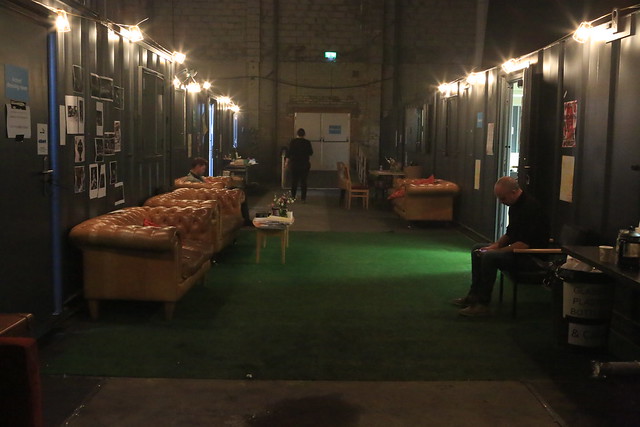 I was attached to Yael Bartana’s What if Women Ruled the World, which takes as a jumping off point, the end of Stanley Kubrick’s ‘Dr Strangelove’  where, ten women are assigned to every man, but in Bartana’s universe, ten women – five actors and five different experts every night – rule the world. Every night the women come together to exchange ideas to imagine alternative futures to our current, fucked up state of affairs. 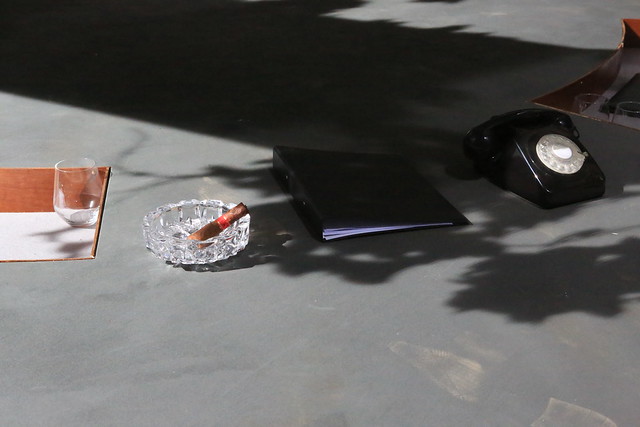 The concept, which blurs fact and fiction, is brought to life, by Vicky Featherstone (performance director), Abi Morgan (writer) and fabulous cast and crew. The creatives talking about the idea, the process and reviews of the show are covered by others elsewhere (see links below). In considering my own creative practice, I was excited to reflect on the making of work that evolves in public, over time.

Bartana gave a clue when she introduced the concept at the launch of MIF – ‘there is a failure of imagination and this needs to change‘.  Bam, I was excited to live under the umbrella of a concept that got us thinking beyond the current status quo. I was invited to witness the birth of a new universe, to stare into the intersection of art, politics, reality and imagination, where Bartana’s art does its work. It was as thrilling as visiting Cern’s large hadron collider, which seeks to understand the birth of the universe and what makes matter, matter. And, for this social experiment, live performance, is both the material and the method.

The ideas exchanged between actors and experts every night, the scope of those exchanges, whatever was left unspoken, and the audience response are the true test of our imaginations, to push the idea of gender back into the realm of myths and unicorns and imagine alternative futures. For some, it would be the equivalent of going to the moon and back.

If I asked you what does earth look like from space, you might google ‘earth from space’ and come up with an image, a picture that fuelled the birth of the environmental movement. A picture that was taken by folk who went there a generation ago, at the height of the US civil rights movement. By considering the race to space at the same time that collective consciousness broke around racial segregation in America, it helps to put a finger on the pulse of a contradiction inherent in the gendered critique of the show. 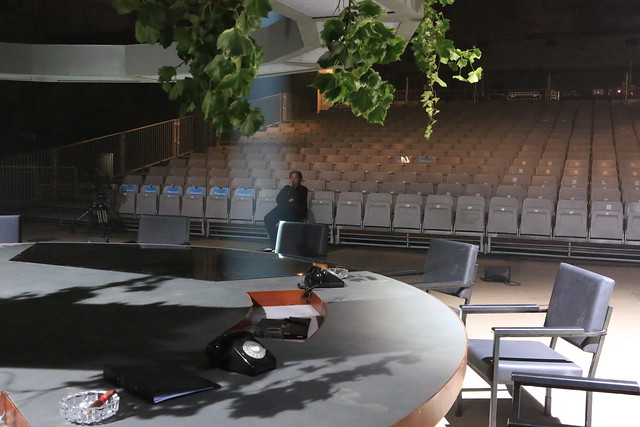 The nature of this public experiment, that investigates the limitations of the spaces we inhabit everyday at home, at work and in the institutions of our minds, can perhaps only be fully understood in the re-watching of it. Unlike the collective consciousness of african americans (and their allies) around the unequal treatment of African Americans, mainstream press are not collectively conscious around the mythical construct of gender and race (ha, or maybe they are and that is what we are paying for?). Indeed, their privilege, which is so invested in these myths, and this privilege, which is itself a myth, continues the perpetual cycle of violence against women, people of colour and those who do not neatly fit into the mythical categories of race, place and gender which maintains the status quo, by controlling the right to work, to education and to reproduction.

There are moments when actors slip out of character, and speak as citizens, there are moments when the experts talk about their everyday experiences. The role of expertise, of democracy and democratic structures, the very nature of society is questioned. Theatre has explored such territory before, with attempts to bridge social divides and, historians will argue that theatre played a role in giving birth to greek democracy.

Watching the show grow and evolve and participating in rehearsals, it dawned on me that the piece not just spans history, but compresses history. It connects a past tangible threat of nuclear war to the persistent threat of climate injustice. Both, of which, are real world extensions of ‘imagination failure‘ that hold an entire species, indeed an entire planet on the cusp of extinction. The show, as you’d imagine, encourages us to be collectively held to account, not just rely on politicians. It would be hilarious, if it weren’t so tragic. Nuclear war, Donald Trump, Brexit and yes, Grenfell and climate change don’t just happen, and won’t just go away. This is what we get when we fail to tune into those closest to the trouble, to listen to what’s ethically and morally wrong in society. Right now, Malcolm X would be talking about chickens and Simone De Beauvoir, updating The Second Sex.

If we are dead in our minds, lost to the myth of privilege, where and how does revolution begin? There was a moment in rehearsals when I suddenly realised that my mother had to see the show. She had tuned in, via PBS radio, to jazz. She was moved by Billie Holiday, Sarah Vaughan, John Coltrane, Miles Davis, Count Basie and Duke Ellington and alerted to the African American freedom struggle, even though she grew up on a farm in Denmark. She passed on this revolutionary spirit to me, bringing up her family in East London. I had no idea we were poor, black or gay until I went to high school. 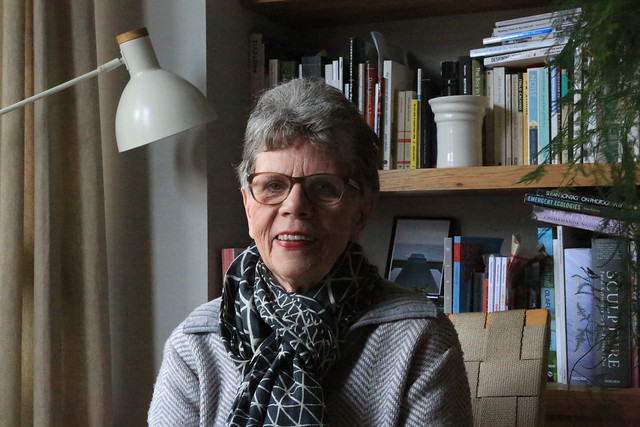 I realised the show needed to be watched collectively, intergenerationally. I invited ten women, a man (who invited his son), spanning 8 to 80, to watch the show. This idea of collective consciousness, plays out into a single, memorable gesture at the end of the show. I asked myself a question at the beginning of the fellowship – what remains after a show – and for me it was this. From here, an idea, I was unable to get started on, due to my own creative failures, now takes it’s cue (more on that some other time). 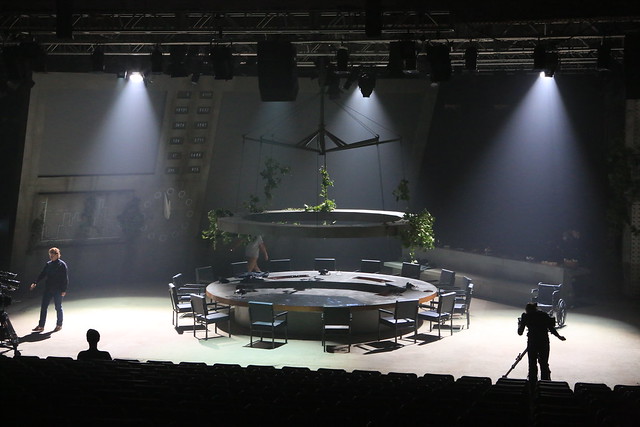 The world was tilted, five nights in a row, and I learned so much. It’s still sinking in, about timing, space, layering and crafting performance, cultural leadership, the power of observation and the kindness of strangers. 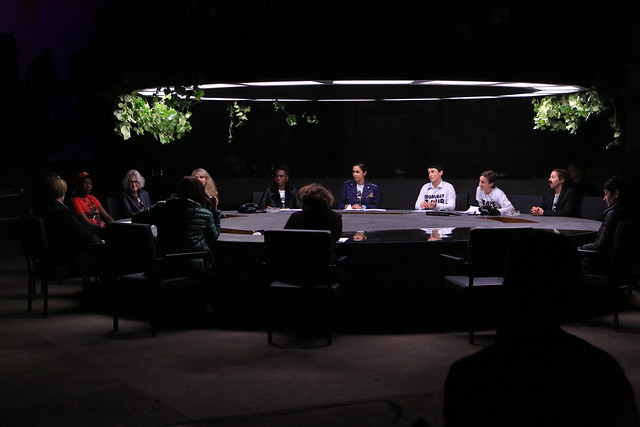 Not only was every show different each night because of the different global experts participating, but, brilliantly, it will become a moving image piece. What Bartana and her team create and unearth with this filmic layer, will likely give an alternative perspective on the world. To my mind, Bartana’s concept holds the same possibility as that image from outer space. Our potential to act on what it reveals, well… that’s up to us and, we need to look closely.

Witnessing the making of this work has been an education. I had been disinterested in the battle of the sexes, because the myth of gender is at the heart of what makes traditional institutions so exhausting (yet not impossible), to navigate for those who are politically black, politically queer. 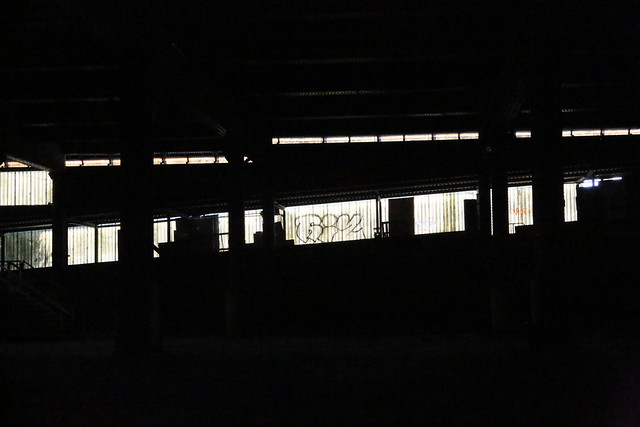 And, it’s here that I found my own blindspot. I had not, fully grasped the extent of violence directed by men at women, not just in physical terms, but verbally too. In a way, I had stepped away from it, had chosen to not look at that reality. Immersed in watching women work together to craft the show, and then paying closer scrunity at work and watching the media, I was plunged into and awakened to it. I now better understand why heterosexual women cannot instantly be allies in the traditional hierarchical workplace. You have to step outside and inside of that to truly see it. I saw the value of third spaces, spaces, that being queer in the West, you might take for granted. Theatre, can of course, be that third space, when the commissioning is bold, against trend.

It will be incredibly interesting to see how a younger generation respond to the piece, as they are in a unique position to create the future, if only we collaborate with them, and, perhaps, to step aside and allow them to lead the way. Do we want to continually re-create the past, or do we genuinely want to create a different future? 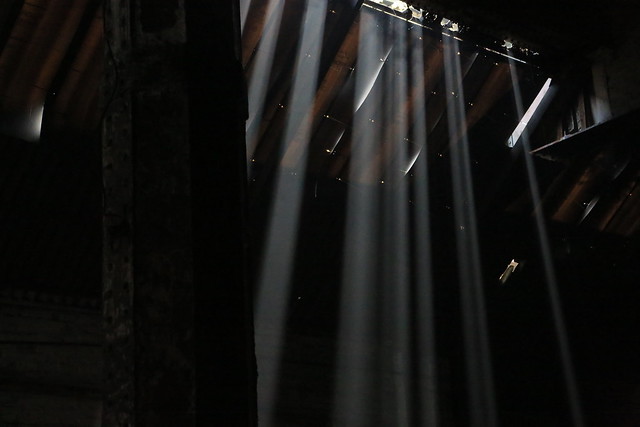 One thing is for sure, hats off for the creativity, trust and uncertainty associated with evolving a new international commission that boldy goes where others might fear to tread. What If Women Rules the World goes, on to Aarhus, Denmark. I hope the Danes, like my mother before them, will tune in and … wake up. The collective consciousness of those who really see and respond to the show are what will the concept, its edge as it expands and travels the globe. Bon voyage! 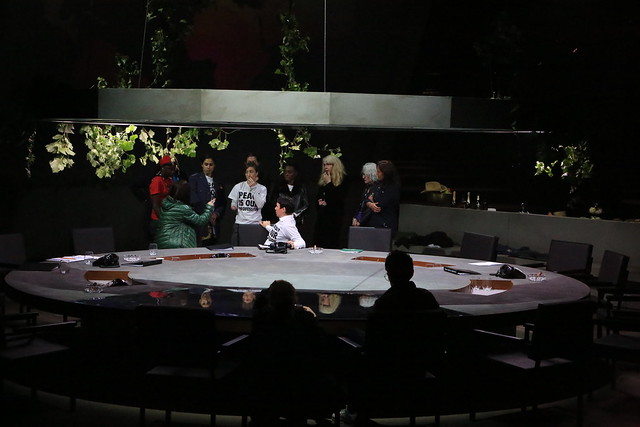