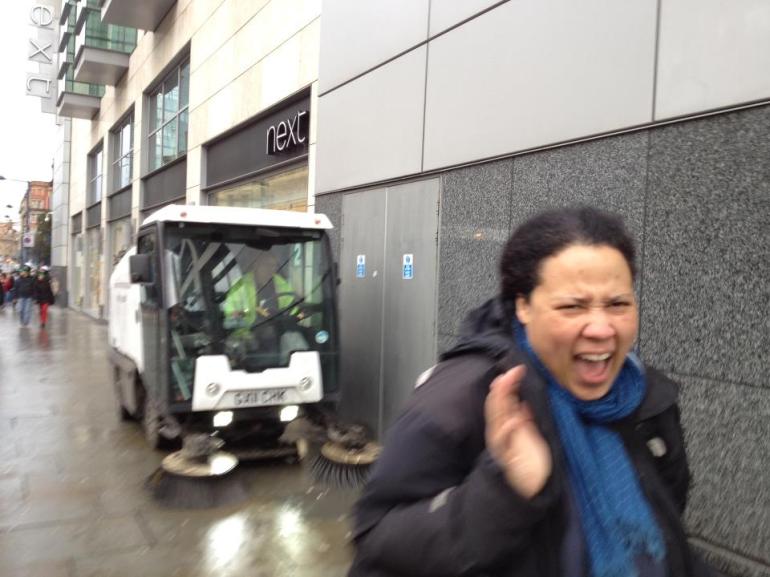 Have had such an exciting couple of weeks there has barely been room to breathe!

Last Tuesday evening i talked briefly @smc_mcr about a new project that I’ve just started working on called Turing’s Sunflowers . The project is part of Manchester Science Festival based at the Museum of Science and Industry.

This week began with a grass roots style launch with Friends of Platt Fields who i met at the Manchester Histories Festival and they invited me to go plant sunflower seeds as part of the amazing cultural celebration, Holi which marks the beginning of Spring with colours. Holi was an incredible celebration – i loved walking home covered in different colours – a great experience.

Today, to my joy, the seed has become a seedling… i danced with the pot around the house before placing it back on the window. I wonder if i need to record this in a diary along with all the songs i am going to sing to it!

After that, jumping the gun entirely, Thursday night, the project was featured on the BBC’s ONE SHOW (can catch it on iplayer for a week – UK only). This meant that Tuesday of the same week I dropped everything to source props, locations and speaker with the BBC coming up to film Wednesday afternoon. An incredible cross-partner team effort made sure everything ran smoothly. It helped that I’ve worked as a producer so knew what needed to be considered (and that sourcing lots of options doesn’t mean they all get used). Quite literally an hour before broadcast there was still stuff to do. I only just made it home to watch it on TV but hell… it was fun… and we have a great story to tell. Importantly I love the project (it links to my interests in developmental neurobiology and citizen science) and the people I’m working with and the partners are a pretty cool to work with.

On the Wednesday I was in Parr, St Helen’s on a project working with young people to get them creatively engaged through IT and photography. I loved working intuitively with two lads, following their interests in comic books, football and computers, firing off their creativity. This session really inspired me to try something new with my niece, Ama who i visited in Edinburgh on the Friday. She had a day off school (founders day) and was bored. So we made a radio show, with her talking about her future and her everyday favourite things in between picking songs off youtube (as well as singing some she had made up herself) and we recorded the whole show on my iphone. There must be an app for this, surely?

Blooming marvellous… ! Finally after scheming up a Sunflower Hackday over several coffees at Manchester Museum, on Friday  i gave a lecture to Youth and Community Studies undergraduates at The University of Manchester based on my past experiences of community engagement work, drawing on their own experiences, recent placements and imagining what the degree will help them achieve in four years time. The students told me that what they came away with from the session was:

I get to set an essay question for them and will probably choose one of the principles for community engagement that they came up with ‘equality & diversity – but not always…’. Discuss!

What’s been so great about this week is that i’ve hit on all my passions… including fitting in a swim at the start of the week and hopefully another soon.